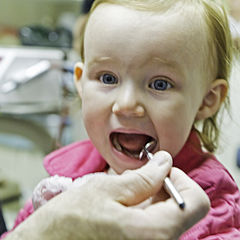 The beneficial effects of fluoride on children’s teeth have been promoted in numerous recent publications.

Fluoride is a natural mineral found in abundance throughout the earth’s crust and it is widely distributed in nature. Some foods and water supplies also contain fluoride.

Research has shown that fluoride applied directly to teeth is important for fighting decay and it is known that fluoride inhibits the process of tooth decay in at least four ways that include:

For children who take in sufficient fluoride during the period of enamel development (up to 7 years of age), the fluoride alters the structure of the developing enamel, making it more resistant to acid attack.

Low levels of fluoride in the mouth gradually improve the strength of the tooth enamel and its ability to resist acid attack. This important mechanism was first described in 1966 and means that early patches of decay can be arrested and damaged enamel will ‘heal’. This explains the dramatic improvement in dental health since the introduction of fluoride into toothpaste formulations in the mid-1970s.

If enough fluoride is ingested during childhood when the teeth are developing, it affects the depth of the fissures (grooves) on the biting surfaces of the teeth.Children who grow up in areas where the drinking water is fluoridated tend to have shallower grooves in their teeth, this reduces the amount of plaque that remains on the surface of their teeth.